My guest today is Ian Ross, the latest recruit to the legion  of authors who write historical novels about the Roman army.  His debut novel is titled ‘War at the Edge of the World’ and introduces his hero’ Aurelius Castus. However this is a story with a difference in that it is set in the later days of the Roman occupation of Britain.  As I describe in my post ‘Meet Ian Ross’ this is a blank period in most people’s knowledge of British history.

So Ian, tell me about yourself and how you started writing?

I’ve written stories for as long as I can remember. I think it was only when I was in my early twenties, after I left college, that I first considered committing myself to writing as a sort of career. Before that it never seemed a realistic option, but I suppose at that age everything suddenly seems possible. I’ve never really looked back.

‘War at the Edge of the World’ is very much a ‘military’ book – do you have a military background?

Not at all – quite the opposite, in fact! But I’ve always had this fascination with the military side of history: wars are all about conflict, and conflict creates stories. Besides, the idea of an individual struggling against adversity, in some great historical upheaval, always has a strong dramatic appeal.

Why did you choose to write historical fiction and what drew you to write about the Roman army? Isn’t it a rather crowded field?

It has becoming quite crowded, just in the last six years or so. There may be any number of reasons for that, but I think Rome has always had a strong appeal to the imagination. It’s that combination of seeming both familiar and deeply alien, I suppose, besides offering enormous scope for the storyteller. We know just enough about the Romans to make them enticing, but there’s still enough that remains unknown to offer a great deal of imaginative latitude. It was a vast period too – we tend to think of it as a single historical moment, but we’re talking about a thousand years of change, turmoil and development. The period I’ve chosen to write about – the early fourth century and the era of Constantine – is quite a bit later than most of the other Roman fictions around at the moment. It’s perhaps a less familiar time, and certainly a tumultuous and dramatically charged one.

Tell me about the hero of your book?  Why did you choose him?

I came up with my protagonist, Aurelius Castus, before anything else. In one sense he’s the model of the sort of tough traditionalist Roman soldier who made and maintained the empire, a man of few words and deep convictions. He’s illiterate, and many people underestimate his intelligence – hence his nickname, ‘Knucklehead’. But I wanted him to have some rather more subtle depths, and to seem a plausible human being rather than a cartoon hero. For me, his heroism comes more from his sense of innate honesty, and his rough sort of compassion. Describing an era as dynamic and brutal as the early 4th century through the eyes of an innately ethical but intensely loyal soldier suggested a useful set of contrasts and conflicts.

How do you do your research?

I confess that I love researching these stories almost as much as I do writing them. I read as widely and as deeply as I can, often for months before I start work on the story, and try to visit the locations I’m writing about as well. Most of this background reading and planning doesn’t appear on the page, and I’m not sure how important a lot of it is; somewhere there’s a boundary between procrastination and vital research, although I haven’t quite located it yet.

Much of the pleasure of both reading and writing historical fiction is the tension between what we think we know about the past and the imaginative freedoms of the novelist; it’s a push and pull, and both sides are just as important to me. One of the joys of writing fiction is that you can use the fragments of evidence as a sort of scaffolding, to construct the whole picture, in ways that a historian never could. But I’m quite scrupulous about getting things right, or trying to: I would never deliberately alter what we think happened in the past, and I’ll only invent if I have some foundation for doing so. I find the rigour of sticking close to historical fact is an aid to imagination rather than a hindrance.

How did you get published?

Via the very usual lengthy process! I’d written quite a few novels before, and had some near-misses with publication, but I think with War at the Edge of the World I found my subject and my style: I was writing the sort of book I truly wanted to write, rather than what I felt I ought to be writing, and that’s an important difference. I found a new agent as well, Will Francis at Janklow & Nesbit, and luckily he was very enthusiastic about the book from the beginning. Having somebody to represent you who really believes in what you’re doing in critical, I think.

‘War at the Edge of the World’ is intended as the first of a series.  Why did you decide on this and do you find it constricting?

I’d always envisaged these books as a series – actually I’d roughly planned out the overarching plot for six connected novels before I’d started writing the first one. The idea of following a single individual across a great sweep of history, during a highly volatile era, has great appeal for me. I don’t find it at all constricting – on the contrary, it’s liberating to be able to work with such a broad canvas, and the thought that I’ve got a lot more historical material to draw on (and plenty more research to do) is a real pleasure.

What plans to you have for the series?  And afterwards?

My conception is that the series will follow Castus’s career as he rises through the hierarchy of the late Roman army, from centurion to one of the foremost generals of the age. His rise in turn parallels the ascent of Constantine to supreme control of the empire. As Castus scales the path of promotion, he gets ever closer to the emperor and the inner circles of power, and the conflict between his beliefs and ideals and the rather murky truths of imperial rule, along with the growing influence of Christianity, become all the greater. As for moving beyond Castus and his adventures, I have plenty of ideas for other novels, some in completely different eras. But that would be many years down the line yet!

Have you any advice for aspiring historical novelists? 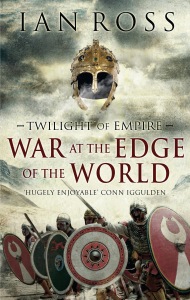 It may seem obvious, but it helps to remember that the people you’re writing about would not consider themselves to be living in the past. For them, it’s the present day. So you need to develop a real affinity for the era you’re working with, whether by copious research, strong imaginative focus, or both. You need to inhabit the scenes you’re describing, get inside them and see them as your characters would; then you can show them as real people in a real world, rather than just objects being passively dragged along by the relentless current of History. In a way, you have to try and liberate your story and your characters from the confines of the past.

You may also like to meet some of the other authors I have interviewed.  You will find them on the ‘ MEET …’ pages on this blog.  This was my first interview with Ian; I interviewed him again in 2017 (three books later) and you can read this on the page MEET AGAIN IAN ROSS.