My guest today is Dr Mark Stibbe, co-author of The Fate of Kings, which I am reviewing for The Historical Novel Society. It is a red bloodied adventure story in the tradition of Baroness Orczy and Charles Dickens, set in the early days of the French Revolution in which a brave Englishman saves a hapless aristocrat from the guillotine and is written in collaboration with New York Times bestselling author G P Taylor.

This is Mark’s first thriller, although he has published over 40 other books.

EJ  It is not often that one reads a collaborative  novel.  How did this happen and how did it work?  Who did what and did you review each other’s work?

I did all the research for the novel and then wrote a first draft of 100,000 words. Then I invited GP Taylor to join the project. He conducted an edit after suggesting some minor changes to the beginning of the novel. This reduced the novel by about 7000 words.

It’s fair to say that I took the lead in this process and Graham respected that. My belief is that the best ideas come out of dialogue not monologue, so I was keen to give collaborative authorship a try. However, breaking out of solo writing can be challenging!

EJ  You are a very experienced author but this is your first thriller.  What made you change genre and do you think your earlier work helped you in writing a thriller?

I have always wanted to write fictional stories, ever since I wrote a twelve-page account of what happened to my teddy bear Edward when he was lost for twelve hours at Inverness railway station. I was only about seven years old at the time, but I was captivated by the process.

Having said that, it would be forty books later before I turned my hand to fiction. While some of the tactics are the same, it was like learning a whole new language. However, I attended a fiction-writing workshop in California in 2013 and that got me started.

Furthermore, twenty-five years as a vicar in the Church of England gave me plenty of rich life experience for writing stories about a vicar who becomes a spy!

EJ  Why did you choose an historical setting for your work?  What drew you to the French Revolution?

I’ve been fascinated by the French Revolution and the Napoleonic era since I was eight years-old. I have many books and prints about this era, all of which adorn the study where I write each day. I have a very understanding wife who puts up with these eccentricities!

I also believe there are important parallels between 1793 and 2017: 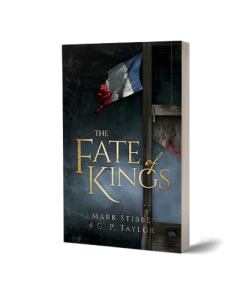 EJ  I understand that The Fate of Kings is to be the first book in a series of espionage adventures. You have a doctorate in Theology which is an unusual background for a writer of spy thrillers. How long have you had an interest in espionage?

My first degree was in English literature at Cambridge. My second in theology. And my PhD in a literary approach to theology! So, stories are my first love, including the spy thrillers of John Le Carré, John Buchan, Ian Fleming, and many others.

Furthermore, as Richard Burton’s character says in the 1965 version of The Spy who Came in From the Cold, spies are not moral philosophers but seedy people with drink problems. They don’t weigh up right or wrong against the Word of God or Karl Marx.

I wanted to reverse this tradition of the amoral spy and explore what might happen if someone with a moral compass became a prime asset in the emerging British Secret Service. What kinds of moral conflicts would arise in the field? Along came Pryce, my vicar who becomes a spy!

That simply hasn’t been done before.

EJ What do you think are the essential elements of a successful thriller? Does it make a difference that this an historical novel?

Spy stories are not about swords, pistols and canons but about stealing secrets and sowing misinformation. They focus on a secret agent that the reader finds interesting, compelling even. Such spies cannot just experience external conflicts. They are at their finest when the true conflict is within their own soul.

Having a strong spy plot is also essential. You must think several moves ahead, like a game of chess. And you must misdirect your reader just as secret agents do. And the enemy must be three-dimensional. ‘No motiveless malignancy’ (Coleridge). He or she must be believable. Their motivation needs to be focused and realistic.

The story then needs to be fast paced but also subtle. You must combine the action of a James Bond movie with the thoughtful complexities of a John Le Carré novel. Real-world issues need to be explored within the pages of your spy thriller. In The Fate of Kings I explore immigration and terror among other real-world topics.

As for history, the theme of espionage is a great way of making the past interesting. The BBC recently ran a three-part documentary series on Elizabeth I’s Secret Agents, to coincide with November 5th. Focusing on the two Cecils, it brought the 16th and early 17th centuries alive in ways that I’d never experienced before.

At the same time, history can make your spy story come alive. When I started researching the era of Thomas Pryce, I discovered and devoured Elizabeth Sparrow’s books, Secret Service and Phantom of the Guillotine. These brought Pryce and his era to life, enriching my spy story as powerfully as my spy story enriches the history.

EJ How did you carry out your research?

I don’t think there’s any substitute for conducting research on location. How else can you smell, touch, taste, hear and see some of the surroundings that your characters inhabited, albeit several centuries ago?

You have to go to their place and make it your own place.

Then there’s the hard work of reading articles and books, visiting libraries and reading manuscripts. And listening to those who are experts in your era and learning from them.

Humility and industry are essential.

The treasures of discovery are found in the field of discipline.

EJ Have you planned the sequel to The Fate of Kings and could you tell us something about it?

My second story is called The Drowning Man. It centres on a mission in which Thomas Pryce is sent to Nantes at a time when the city is under the tyrannical and cruel governorship of Jean Baptiste Carrier – inventor of the noyades (mass drownings).

I’m well into it and I can tell you that this story is much darker.

EJ How can we find out more about your work?